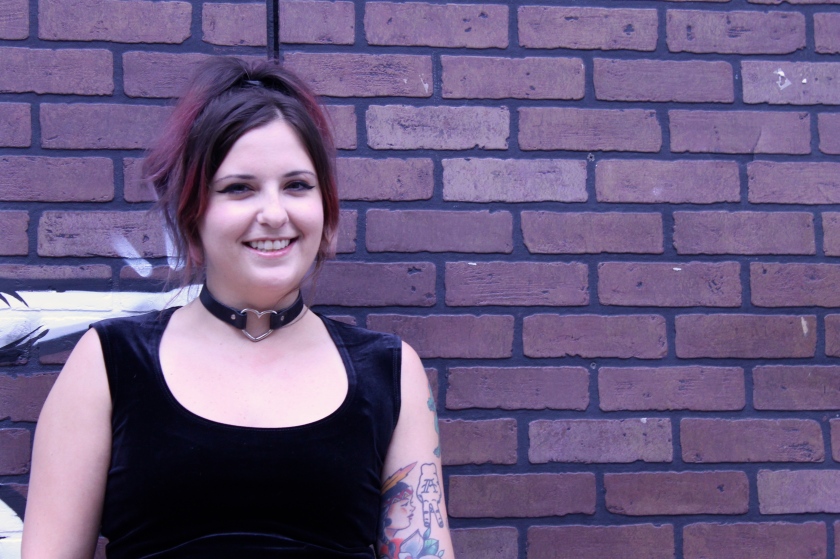 Why did you decide to come to Puerto Rico?

I was dating somebody who is actually one of the other owners with us. Then, we broke up, but we were already opening the club, so I stayed. It was kind of a big girl decision. We [the club] celebrated our 2 year anniversary in February and we broke up before we even started opening completely.

What’s the story behind Club 77?

We were talking about having a mid-sized venue because we have El Local, which is small, and we have La Respuesta, which is a bigger venue. But, in the middle, there wasn’t really anything. Also, we wanted to bring bands from the States to play. José is in Las Ardillas and he has toured a lot. Some bands come here on their own every once in a while, but it’s not typical for them to consider Puerto Rico as a stop in a tour. Our point was to fly certain bands out. Kristen [Fink] joined quickly after. She used to own Café 103. She was really helpful because I had never owned a venue before, so she gave input as to how to shape everything. As a writer, I was the one making connections with bands. José is a musician, so all three of us combine our knowledge to make it happen.

Why did you study journalism?

I always wanted to be a writer since I was in 5th grade. In high school I thought I’d be a journalist so I could actually make money. But, that was before the print industry died. So, that was a terrible plan. In Atlanta, I was working full-time as a receptionist at a salon and doing freelance writing. When I moved here I got the job with MTV and starting opening the club. As soon as I moved here, it changed my perspective. I had never lived outside of Atlanta, ever. I think the perspective here is different from being raised in the South. It’s a different culture in some ways and in other ways is the same. Its kicked me in the ass.

How did your childhood shape who you are today?

It taught me that you have to work hard for what you want; nothing is handed to you. It instilled a good work ethic in me.

Why did you decide to become an entrepreneur?

I never thought that I would open a business. I didn’t really think that I would have the opportunity to do something like that, especially a physical, storefront kind of business. You could definitely start your business in other ways and costs less. But, this was really expensive. So to be honest, a relative of my biological father who was really rich passed away. I had never met him or heard of him in my life. My siblings and I each got an inheritance. I didn’t see that coming at all. I decided that I needed to do something legitimate with it and not just fall back on it. I saw it as an opportunity to make it happen.

What are the challenges of being a female entrepreneur?

My biggest challenge is probably walking from home to the club and getting catcalled on the way here or while I’m carrying beer boxes. In this situation, luckily, the punk scene and independent music scene in Puerto Rico are pretty feminist. It’s a really progressive group of people, I think.

How would you describe the independent music scene in Puerto Rico?

It’s very close-knit. They have all known each other for a very long time, but somehow they are really inventive still. I think, in a way, because it’s an island and not everybody gets to tour and not as many bands come here, it makes them create something new.

How would you describe Club 77?

It’s an independent, DIY venue. It’s not just a music venue because we do drag and other things, like the 80’s Prom we have in a few weeks. Hopefully, a safe space for people to party.

What do you hope to accomplish with the events that you host here?

I hope to draw more attention to Puerto Rico in the independent music scene by bringing bigger bands. I guess be another function of the community, another place for them to play, to be, to showcase what they have created. In some ways, events like Girls To the Front is a way to uplift new women designers and artists. In drag, it’s a place for alternative kinds of drag to exist. It’s in general a place where people can do what they want.

Describe a normal day for you.

Mondays through Wednesdays I wake up early, take my boyfriend to work at 7, and then I write. If it’s a Monday or Tuesday, I go to [Departamento de] Hacienda to deal with ticket bullshit. We have to go there every week. In between, I do Club stuff like promo and social media. Wednesdays I’ve been working the shift for movie nights. The rest of the week I open and close, so I don’t wake up as early because of how late we close the night before.

What is the process of organizing a show?

Sometimes we organize it and I approach people. Kristen doesn’t a lot of the booking because she does most of the day-to-day stuff like the accounting and all that. But, sometimes she had ideas too. We try to shape the show or I’ll have an idea for a ridiculous drag show or the Girls To the Front show. But, other times it’’s promoters who contact us and we oversee it and make sure that it’s appropriate. We look at how much they are charging, how many bands there are going to be and all that stuff.

As a freelancer and entrepreneur, how does your work style differ from ‘corporate’ attire?

Well, I get to do whatever I want. I can be as casual or as dressed up as I want. It varies a lot, but it’s usually a variation of this: a high-waisted something, the fountain ponytail and the choker.

Have you ever felt prejudice from people because of your tattoos?

No. Mostly it’s questions that invade my space, like people touching me. And I’m like ‘Don’t do that!’. I don’t think it’s that serious. I don’t want to play how shitty men are because they are. But, in my day-to-day, it’s alright.

How do you balance your private and professional life?

My boyfriend works all day and I work at night. So, I try to hang out with him whenever I don’t have work during the week. I make time when I can. But, he understands that I work a lot and that’s why he liked me in the first place. So, he has to continue to be cool with that.

What do you consider to be a badass?

Somebody who does what they want, but is also not a shitty person.