I’m often asked what my major is, to which I immediately reply with ‘Sports Journalism.’ People ask me if I’ve ever played any sports and question how a girl could like sports. Some of them even challenge my knowledge of the game. Amidst all these questions, one common denominator stands: the interrogator is always a man.

The statement always throws them off. How can a girl like sports? Well let me tell you, women love the game.

For me, it began in the summer of 2010. The FIFA World Cup in South Africa was the most watched sport event of the summer. I barely knew the teams or any of the players in the tournament, but that ignited my curiosity. Every day, I woke up to watch the matches accompanied by the annoying but blessed sound of the commentators’ chants. The narrators called it “the beautiful game” and indeed it was.

The final match between the Netherlands and Spain was the most nerve racking game I’ve ever watched. Spain won the game (1-0) with a remarkable goal from Andres Iniesta. Tears went down my face as if I were a Spaniard celebrating their first World Cup. That moment I realized the passion that went through my veins meant much more than just watching the game.

I immediately began searching information about the international teams, the European club teams, the players and their positions in the field. Most importantly, I learned about techniques and tactics, started reading sports newspaper from Spain like Marca and Mundo Deportivo. I became a student of sports journalism, specializing in soccer.

During my third year of college, I studied at the Complutense University in Madrid, where they offered a course in sports journalism. Lola Hernandez, a prominent female sports reporter in Spain, came to our classroom to talk about the challenges of being a journalist and being a woman in a business dominated by men. Hernandez told us that female reporters lack of credibility inside the sports world. In response, she dared every girl in the class (the number barely exceeded 5 girls in the room) to read about the history of the game, to communicate with truthfulness, to work in the field, to look for the news, to prove the men in the industry that women can know equally or more about sports. 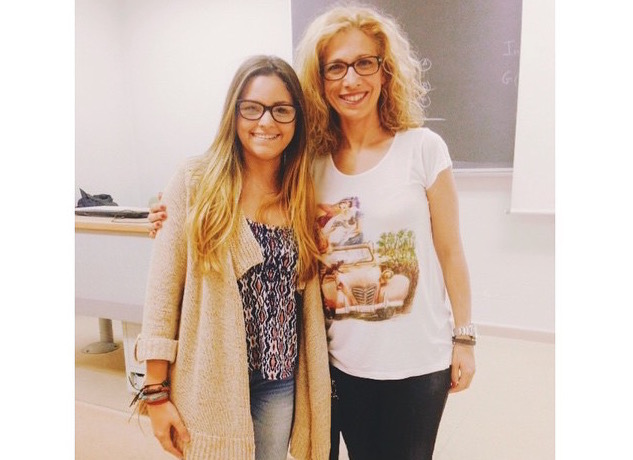 With Lola Hernandez during her conference at Complutense University of Madrid.

I had the chance to immerse myself in sports reporting in 2013 covering high school and college sports events with Onda Deportiva in San Juan, Puerto Rico. We focused on the students’ ability to further their development through sports. Still, my good work ethic and passion didn’t derail the sexism.

Recently, I interviewed a team coach regarding the players’ names and number, to which he responded: “I’d give you my number but I am married.” I just smiled sarcastically.

For him, it might have been a joke, but to me it was first of many sexist encounters to come. Yet, it shouldn’t be like that.

Luckily, ESPN has been dealing with the incorporation of female reporters and anchors to their programming. Something that began as an experiment proved to be an increase to the network’s ratings. ESPN Deportes introduced Carolina Guillen, Adriana Monsalve and Carolina Padrón as the trio of female faces that took over sports coverage.

Without a doubt these three female reporters are my inspiration to become a sports journalist. Two Venezuelans and one Mexican rule ESPN and so can a Puerto Rican one day. I am very aware of the demanding and competitive atmosphere of sports media, but I am willing to make a difference and open up the doors for women who have a passion for the game.

Women and sports are not mutually exclusive. I am a girl and I do love sports. I’m not just a pretty face in a world dominated by men.